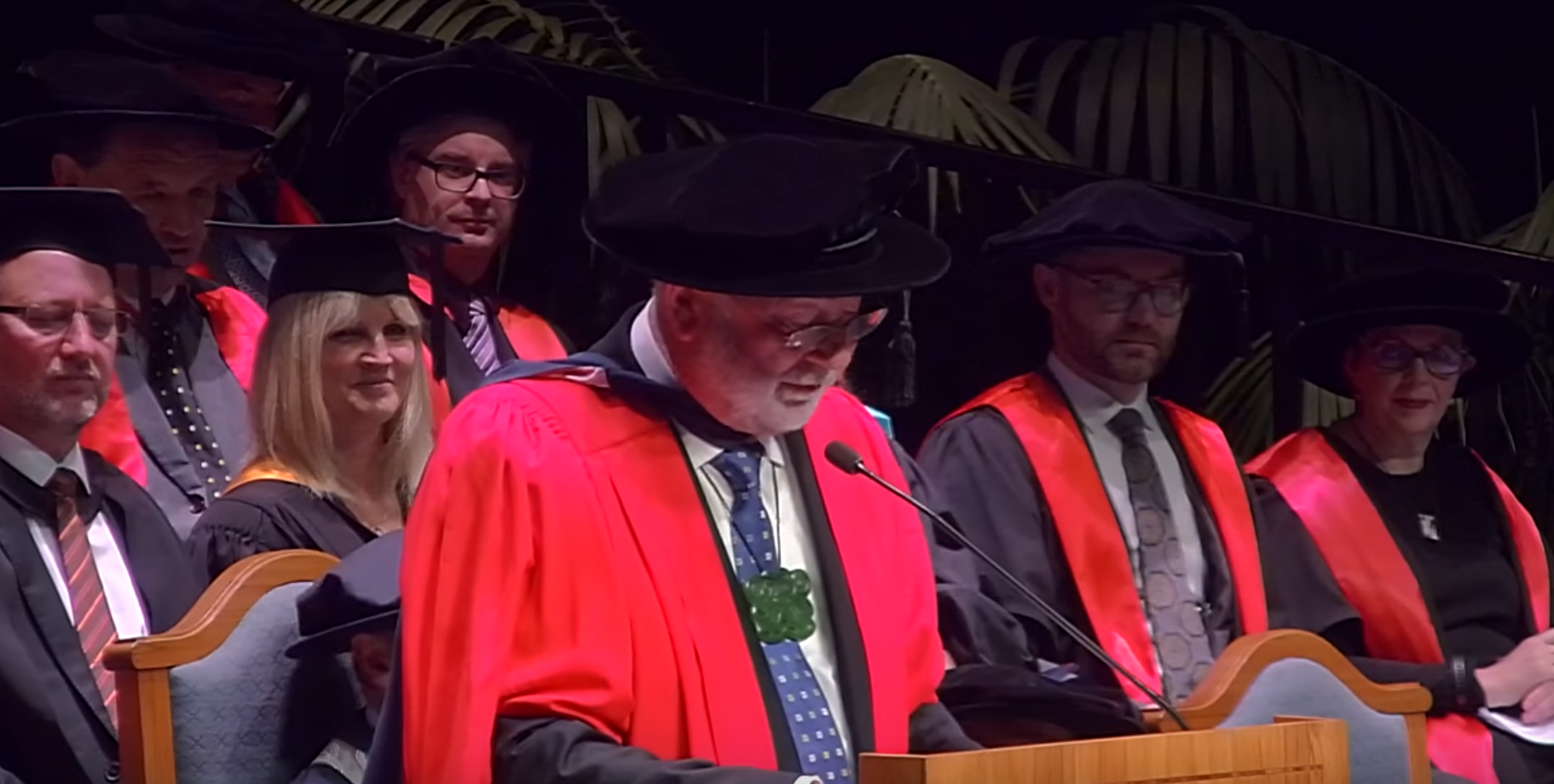 A determination to forge peace

It is a significant honour to be part of this celebration, to acknowledge not only the achievements of graduands, but the leadership that Massey has shown over many years, in shaping the hearts and minds of thousands of students. I particularly want to  acknowledge Distinguished Professor Paul Spoonley who started teaching at Massey in 1979, a few years after I began as distance learning student. Paul recently asked this question of students “What does it mean to be a New Zealander in the 21st century? He then continued, “The question is the same as in the 1970s and 1980s, but the answer is going to be different.”

I came to Massey in 1974, seeking an answer to that very question. As a Senior Sergeant of Police, and a Māori, I found myself caught between the competing factions of the decade; on such issues as race relations, the anti-war movement; Maori development, and women’s rights. It was a decade of active listening, debate, reflection, and the occasional sound of a penny dropping.

In 1983, I decided to take a final paper in Women’s Studies. Along with many other New Zealand males, I had ignored the growth of the feminist movement and in particular the efforts of women liberationists, who over the previous decade had  struggled to change the position of women in society. When I attended the compulsory on-campus workshop, I made two important discoveries. The first was that in a class of 68 students, I was the only male. The second discovery was that a sizeable portion of the class didn’t want me there, and argued that I should be sent home. They needed the opportunity to talk freely with other women, to share their experiences, and understand the oppression in their own lives.

The lecturer declined to grant me an exemption, and I stayed for the full three days. I made myself invisible, and listened as women debated and discussed their place in society, and the way in which women were routinely patronised and treated as less important than men, by society, politicians and the media. It caused me to reflect on my personal attitude toward my wife and daughters, on police reluctance to intervene in cases of domestic violence, and the lack of women in senior management. It was quite a learning curve. At the end of the three-day workshop, one of the more forthright women declared that I “wasn’t a bad sort of a prick after all”. I scored an A+ for the course, and had my final essay published in a Massey compendium of sociological essays. The ultimate accolade came when I was invited to speak to my essay at a Women’s Conference, organised by Broadsheet – a monthly feminist magazine. The invitation was subsequently withdrawn when it was discovered that Kim Workman was a male - but those were the times.

That experience taught me two things. First, we need opportunity and space to talk within our own communities of interest, to raise consciousness, and plan for challenge and change. Second, that we need to create places to listen to “communities of the other’, in order to constantly challenge our own attitudes. So often, social policy is formed in the absence of external dialogue. No government in the last thirty years has, in developing criminal justice policy, seen fit to consult with prisoners. As a result, we have developed a ‘criminology of the other’, in which offenders are stereotyped as members of a dangerous under-class.

When we do engage with others, miracles occur. Last year, I took part in a series of conversations within the Mongrel Mob about gender awareness. A couple of months later, I witnessed a modern miracle. I was shopping at Countdown, and came upon a leader of the Mob pushing a shopping basket, with a mokopuna in tow. Mobsters don’t shop – that is for women. I couldn’t resist it, and said to him ‘Tama, you’re shopping! He replied, somewhat embarrassed, “Mātua, anything women can do, men can do better!” I responded, “But you’re at Countdown – your whānau usually shop at Pak'n Save”. He proudly produced his iPhone. “Ah, but I have this app. It tells me where the bargains are. So I get the bargains at Countdown, and do the rest of my shopping at Pak'n Save.” At that moment, the shop supervisor came rushing up, “Is everything all right sir?” she asked me. I was wearing a suit at the time. Tama and I exchanged knowing glances. “No, I replied, “It’s not” My mate knows where all the bargains are, and he won’t tell me”. At that we both cracked up, and the supervisor hastily retreated, not understanding that we belonged to the same group.

Is there a message in all this? I have no doubt that amongst the graduands, there are people who will scale Mt Everest, who have the potential to be national and international leaders, and people of great influence. But we all have the capacity to lead – and if we choose to do so - there is a cost. The price of vision, and determination to pursue a vision, includes humiliation, loneliness, and abuse. The reward is that if you persist for long enough, you have the potential to transform. You may never see a nation fully restored. But from your own mountain top, situated in your own community, you will have pointed the way for others. Imagine the collective impact if each of us here today, sought to change the way our community thinks and behaves. Imagine a nation in which strength is defined not simply by the capacity to engage in political and civil conflict, but by a determination to forge peace - a land in which all might come together in a spirit of unity.

This different, better place beckons us. We will find it not across distant hills or within some hidden valley, but somewhere within our own hearts. Kia ora tātou."