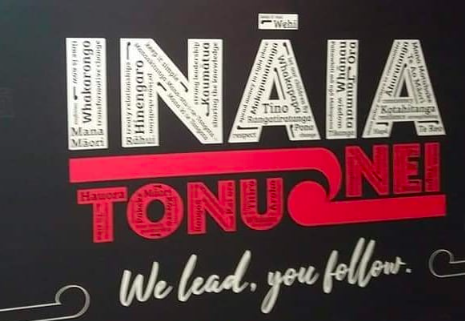 I’d like to acknowledge Matua Anzac Wallace who passed away days after Ināia Tonu Nei was held. Matua Zac was especially important in the formation of this hui. Zac stood up and called out the government at the 2018 National Criminal Justice Summit asking,

Through his courageous disruption, the seeds of Ināia Tonu Nei were sowed. Over seven months, Te Ohu Whakatika (representatives from the Māori who attended that summit) tended to those seeds. They worked in a voluntary capacity with support from the Ministry of Justice to design and convene a Hui Māori which was held Rotorua on 5-7 April.

The driving theme of the hui ‘Ināia Tonu Nei (now is the time) – We lead. You follow’ unapologetically stated that this was a space for Māori voices, government ears, and collective transformational action.

Just over two hundred people came and actively participated, effectively filling the space with over a thousand years of knowledge and experience. From rangatahi and lived experience, to those working within the system, from academia to those on the ground the hui held space for attendees to weave together and tend the crop which had been sown.

The hui was structured around three themes:

Friday set the framework and focussed on Inamata. Justice Joe Williams reminded us about the importance of whanaungatanga and linked the decades of colonisation to our situation now. A confronting realisation, his kōrero sat in the minds of many overnight who thought about the different ways the ‘glue’ of our whānau, hapū and iwi networks are not as strong as they once were, and that increasingly they are also just, gone.

Saturday was focussed on Onamata, the what is happening right now. We started the day with Rob Ruha who stirred our wairua with his intentional waiata choices and the ‘Shaker, feeler, insider’ activity that drummed home for us the importance of listening to and valuing the insight of the ‘insider’. We then heard from insider Patricia Walsh.  An inspirational wahine toa who shared her story of lived experience ‘from person of interest to person of the year’. She walked us through some of the horrors she has endured in her life and held our hand as she gave insight into what it takes and what it doesn’t take, to transform the legacy of a life and of a whānau. The words Justice Joe shared the night before rang truer still.

We then heard from a panel who took turns highlighting issues within each of the sections of the pipeline. Workshops were then held around the justice pipeline sections to capture as much of the expertise in the space as possible. In these workshops, we were encouraged to contribute what we thought each part of the system should keep, chuck and change.

The strongest point of the hui—that clearly captured the reason we needed Ināia Tonu Nei—was the Anamata session on the final day. For this session all attendees were split into two rooms based on whether they were tangata whenua (Māori) or tangata tiriti (non-Māori).

Four parallel groups ran in each room; State care and protection, Police/courts, Prison, or ‘The silent sentence’ (reintegration). We were asked to pick a kaupapa and in that group workshop what the goal for 2040 should be and the steps to get there. The twist followed when the notes from the alternative room doing the same session were swapped – i.e. tangata whenua in the prison session had their notes swapped with the tangata tiriti prison session. The aim was to highlight any differences in Anamata vision.

When everyone was called back, facilitators from each session stood up and gave feedback to the room, summarising what their original group said and then sharing the differences their group noted following the swap. One of the most courageous speeches was from a rangatahi who stood up and gave her groups feedback,


“When the facilitators swapped our papers, some people said we’re saying the same thing but in a different language – no, I disagree! The ideas might be the same, but the lenses are completely different! Thank you for thinking you know what’s best for Māori but how can you when you haven’t walked in our shoes and experienced our mamae?... Invest in rangatahi so we can sit at these tables and be influences. We’re ready and capable.”

Furthermore, tangata tiriti groups discussed ways to improve partnership within existing the structures while tangata whenua groups highlighted power and control dynamics between the state and Māori which led to discussions of deconstruction, decarceration and abolition in relation to all sections of the pipeline.

These distinctions are so important. As the rangatahi said, we may have similar ideas but they are from different lenses. While many non-Māori and Māori may agree on the past and present issues, and the colonial context that they sit within, it will never be enough unless we see eye to eye on anamata. It will never be enough unless Māori are leading the way towards our own futures, unless we escape the grips of a colonial system and are given space to form our own systems. On one of the beautiful tīpuna banners that guided us around the hui spaces expressed this best. Whaea Eva Rickard said,

What became clear from these calls was the importance of constitutional transformation, which Annette Sykes and Dr. Moana Jackson spoke to. Annette argued that it is not a vision but a fundamental goal and asked that we take these messages home with us, to use what opportunities we can to continue the rebuild of our own systems, as many have been doing for years. Moana held a mirror up to the room and reminded us of who we are and of what our tīpuna signed for,

“Rather than talk truth to power, we are talking the truth of our power. We must question the power that the Crown assumes it has. There is nothing in Te Tiriti that gives the Crown the right to incarcerate our people or take our children into state institutions.”

“Do you think our ancestors would have signed the Treaty if they knew the people they were signing with would throw their moko into prisons? Would build prisons? No.”

What came out of Ināia Tonu Nei was not new, was not radical. These things have been said for many years, but I believe holding space for brave and critical discussions like the hui provided are important for us Māori to come together to dream and build a better future together. It was also important that there were some willing tangata tiriti there who experienced first-hand the realisation of misalignments in worldviews and the importance of the voices of the insiders.