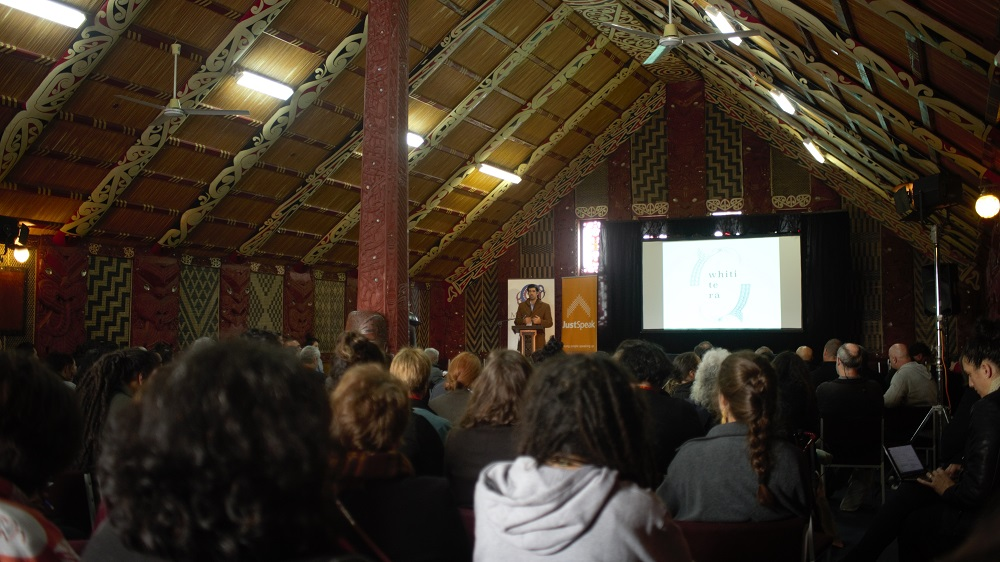 JustSpeak and Mahi Tahi Akoranga Trust came together to organise a Kaupapa Māori hui on transformative change in criminal justice which took place in mid-July this year. I was fortunate enough to attend this, and along with fellow JustSpeak volunteers we excitedly travelled up to Rotorua for the two-day event.

Following our pōwhiri onto Te Papaiouru Marae we were introduced in by members from Mahi Tahi, JustSpeak, and our facilitators Haimona Waititi and Kiri Allen. Our first day consisted of listening to a variety of speakers, between which we moved into our ‘whanau groups’ for continued discussion on the issues raised by each speaker. These whanau groups were decided prior to the event to make sure that they were made up of a diverse mix of people, with the idea that we would all contribute different thoughts and ideas, and often lived experiences. My group had a current police officer, a psychiatrist, kaumatua, many from NGOs, and three people who had experienced incarceration.

Kaupapa Māori justice was discussed by Dr Kim Workman, setting the floor for whanau group discussions. My whanau group talked about the appropriateness of tikanga in prisons, two of our members explaining how tikanga programmes were vital on their own paths to rehabilitation, that reconnecting to their culture was important in realising who they were, how they could accept responsibility for the hurt they caused others and provided them a sense of who they wanted to become.

As a criminology student, I was initially a bit taken aback by that comment, but I knew it to be true, and the frustration that lies in seeing our people again and again as crime statistics was evident in everyone who was at the hui. Annette’s speech was not only reflective of those at the hui, but inspiring. Undeniably, it was the call to action that brought everyone together for those two days, and highlighted the key consideration - how do we bring about transformative change and what will that look like?

Buzzing with emotions, this speech set the ground for our second day. Our first day closed with one last gathering in the wharenui where people stepped up to the front and talked about ideas for subjects we could discuss next – setting a timetable for our ‘unconference’ conference on day two.  A number of main topics were rounded up including:

On the second day ideas were discussed about how to improve issues facing Māori and the criminal justice system. Themes including advocacy for drug reforms, increased access to kaupapa Māori programmes for those in prison, expanding prisoner rights advocacy, and further bolstering iwi justice panels led to action plans being formed. End goals spanned the decriminalisation of drugs, traffic offences, and benefit fraud charges, through to rangatiratanga, decolonisation, and complete abolition of prisons.

Whiti Te Rā was incredibly inspiring. I feel so privileged to be able to have met the people I did, and to partake and be a part of a space buzzing with emotions dead-focussed on sharing and forming proactive strategies. A diverse range of voices spoke up but what came through most for me were the ideas surrounding tino rangatiratanga, that Māori need and want the tools to deal with Māori criminal justice themselves. That whanau, hapu and iwi want to take more responsibility for dealing with offenders and victims. That the state continuously fails us, by failing to accommodate Māori and our needs, so we need to begin making proactive changes ourselves. A national working group was formed out of this hui who will steer us towards this kaupapa Māori vision.

An important quote from Dr Kim Workman's presentation sums that up perfectly:

"Unless it is accepted that New Zealand has two founding cultures, not one; unless Maori culture and identity are valued in everything government says and does; and unless they are welcomed into the very centre of the way we do things in this country, nothing will change. Maori will continue to be perceived, and know they are perceived, as an alien and resented minority, a problem to be managed with a seemingly endless stream of taxpayer-funding programmes, but never solved" (Waitangi Tribunal, 2011. Ko Aotearoa Tenei)

Now the Call to Action continues. Those who attended Whiti Te Rā and all those who see the need for change – we will see that change happens.